The key concept for understanding polymer materials is the tube concept [S. F. Edwards Proc.
Phys. Soc. 92, 9, 1967]. The idea is that the thermal fluctuations of a polymer chain is localized to a
tube-shaped region of space along the coarse axis of the polymer. This is due to molecular
crowding, since each molecule is typically entangled with 100 other polymer molecules. This
coarse axis of a tube is known as the primitive path (PP). The tube concept have been very fruitful
for understanding the basic physics of polymer materials, and numerous models have been
developed since the inception of the tube concept. These models differ in their assumptions on the
relation between the primitive path and the structure of the polymer liquid, and how the primitive
paths responds to to deformation. These exact relations has remained unknown until recently, since
no experiments has existed in which these tubes could be directly observed and characterized. 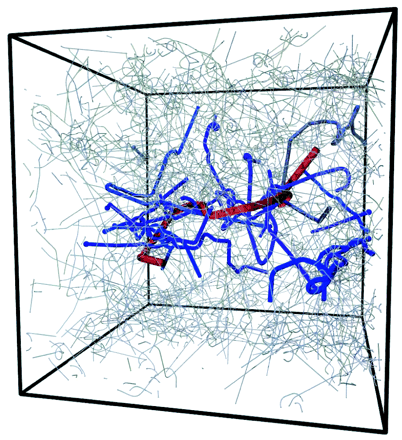 With our primitive-path analysis we were the first to provide a first-principles proof of the tube concept and obtain the tube structure directly from the molecular structure  of our model materials. This illustrates the scientific impact that computational methods can have. We published this in Science. The visualisation is one I made for our Science paper, and it shows one of the chains PP (red) together with its entangled neighbour chains (blue), and all other chains in the melt (thin gray lines). This illustrates the molecular crowding experienced by the red chain due the the blue chains. By analysing these structures, we can predict material properties that agrees well with experimental data. 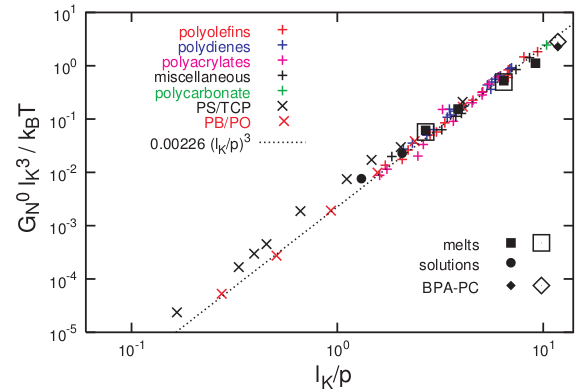 The figure shows a comparison between the plateau modulus of a large number of known flexible polymers vs. the predictions from the Primitive Path analysis of the topological properties of the structure of the polymer liquids. Our computational analysis method has provided the crucial and until now missing experimental and theoretical link between the molecular architecture of polymers, the tube structure, and the resulting viscoelastic material properties.